How coffee is grown?

on June 05, 2020
Most coffee drinkers in the consuming countries know coffee primarily as a beverage, secondarily as a ground or powdered substance which, when mixed with water, will yield that beverage. The coffee that we drink is made from ground roasted beans, but since so much coffee is sold ground, very few people get to see whole bean coffee.
These green beans are the hulled and dried seeds of the coffee tree. The tree flowers and bears a red cherry; the cherry has pits; the pits are the seeds; the seed are the beans. They are very hard, unperishable; unplantable, and without coffee flavor or aroma.
The Cultivation of Coffee
The species of coffee which has traditionally provided the world with most of its crops is Coffeea arabica. While Coffea arabica continues to dominate the world supplies, in recent years Coffea robusta has become more and more important. They can be successfully cultivated at lower altitudes than those suitable for Coffea arabica. 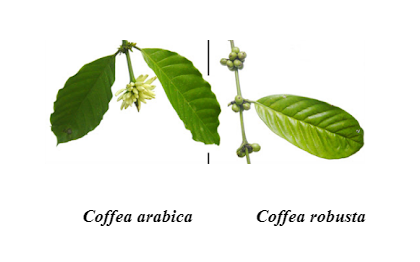 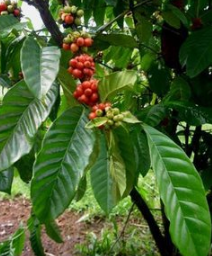 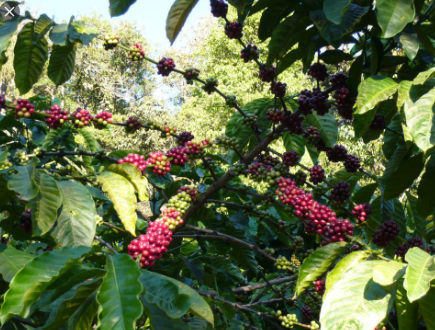 Coffea robusta
Arabica trees generally do not bear fruits until their 5th year, while yields of robusta are generally realized 2 or 3 years after planting. Robusta is more resistant to diseases than Arabica and fares better against the ravages of frost.
The flavors of Robusta does not compare favorably with Arabica, but its robust nature, rapid growth and high yields make it popular with farmers.
A third species of coffee is Coffea liberica. It grows large, sturdy, and is resistant to diesease. but its product finds little favor outside Liberia, where it grows in the lowlands. Its low yield makes it unattractive to farmers. So far it has not become commercially important. 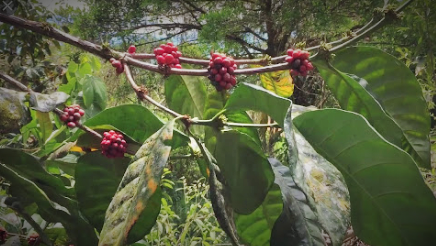 Coffea liberica
The coffee plant is a small tree or a large shrub, depending on how you look at it- which if allowed to attain its full height would grow to between 14 to 15 feet. It is usually pruned to a height of between 5 and 12 feet. The plant has glossy, deep green, simple leaves, opposed to each other in alternating pairs.
Though sometimes called an evergreen, it is not; its leaves last only from 3 -5 years. As there are no drastic changes in the tropical and subtropical climates where coffee grows, the trees bear flowers and fruit at various times during the year.
The flowers are small, white, and delicately fragrant. These blossoms, whose perfume has been compared to the scent of orange blossoms and jasmine, fall from the trees after only a few days, to be replaced by tiny clusters of green cherries. As the cheeries ripen, they get larger and turn into deeper red. When the cherries have turned a deep purplish red, they are ripe and ready for picking. 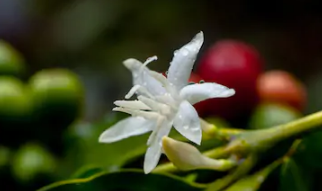 The number of times a tree flowers and bears fruit in a year depends on the temperature and moisture of its environment. At the higher and cooler semi-dry altitudes flowering and fruiting may occur only once a year.
Each cherry normally contains 2 locules (chambers); each locule contains a "seed" and its parchment covering. The seeds or beans are usually round-oval shaped, flat on one side, and amrked longitudinally by a shallow incision. When a cherry has one locule and contains only one seed, that seed is usually round and is called the peaberry or male berry. 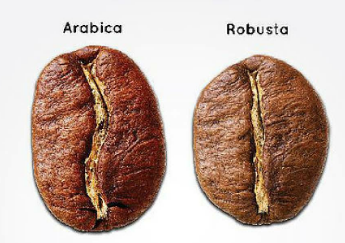 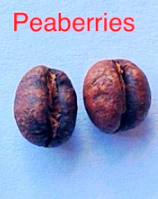 Cherries containg peaberries are usually found at the extremities of the branches. The peaberry coffee was prized because the round beans could be shaken around in the pan and were easy to roast evenly. 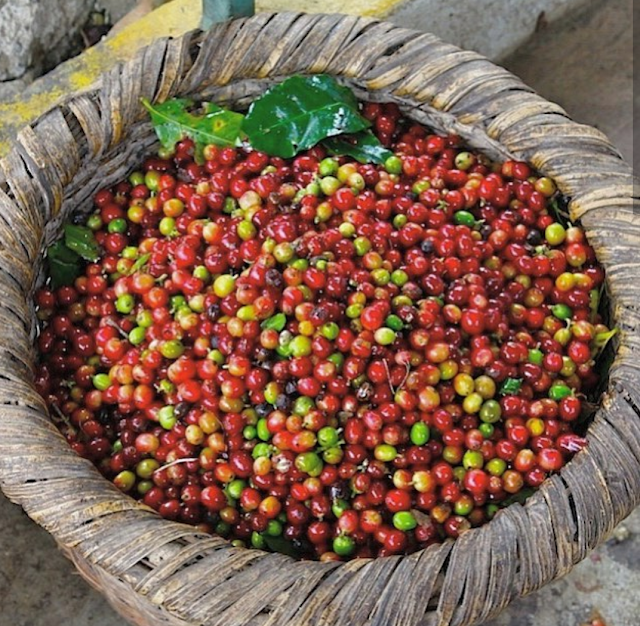 The cultivation of coffee starts with the seed. The finest seeds, those known to produce hardy trees with high yields of good flavored coffee, are selected for planting. The seed used for planting has its parchment- like covering- stripped of that covering, it becomes the green coffee bean of commerce.
Seeds are usually given a start in a nursery on the plantation. Planting can be done anytime during the year. The seedlings are permitted to grow in the nursery for about a year, until they have reached a height of 18 to 24 inches. They are then transplanted in the coffee grove in rows ten to twelve feet apart, in much the same fashion as apple trees are planted.
Coffee grows at all levels from sea to 7000 feet, Robusta coffee seems to thrive in the hotter, wetter lowlands ( upto 3000 ft), while coffee the fine flavored Arabicas come from trees growing at the cooler higher altitudes. Coffee cultivated at higher altitudes mature more slowly and develops more and better flavored oils. Hilly gorunds has the advantage of offering the kind of exposure that coffee trees need- sunlight part of the day, shade for the rest.
The soil should be rich in potassium, nitrogen, and phosphoric acid. The soil should be moist and loose enough to accept rain while allowing excess moisture to drain quickly away. Well drained land is important to the health of the tree.
A coffee tree raised from seed generally begins flowering in its 3rd year. A good crop can be expected from the tree in its 5th or 6th year, and it will continue to produce a good crop through its 15th year.
It takes around 2.5 kgs of cherries to produce 0.5 kg of beans. 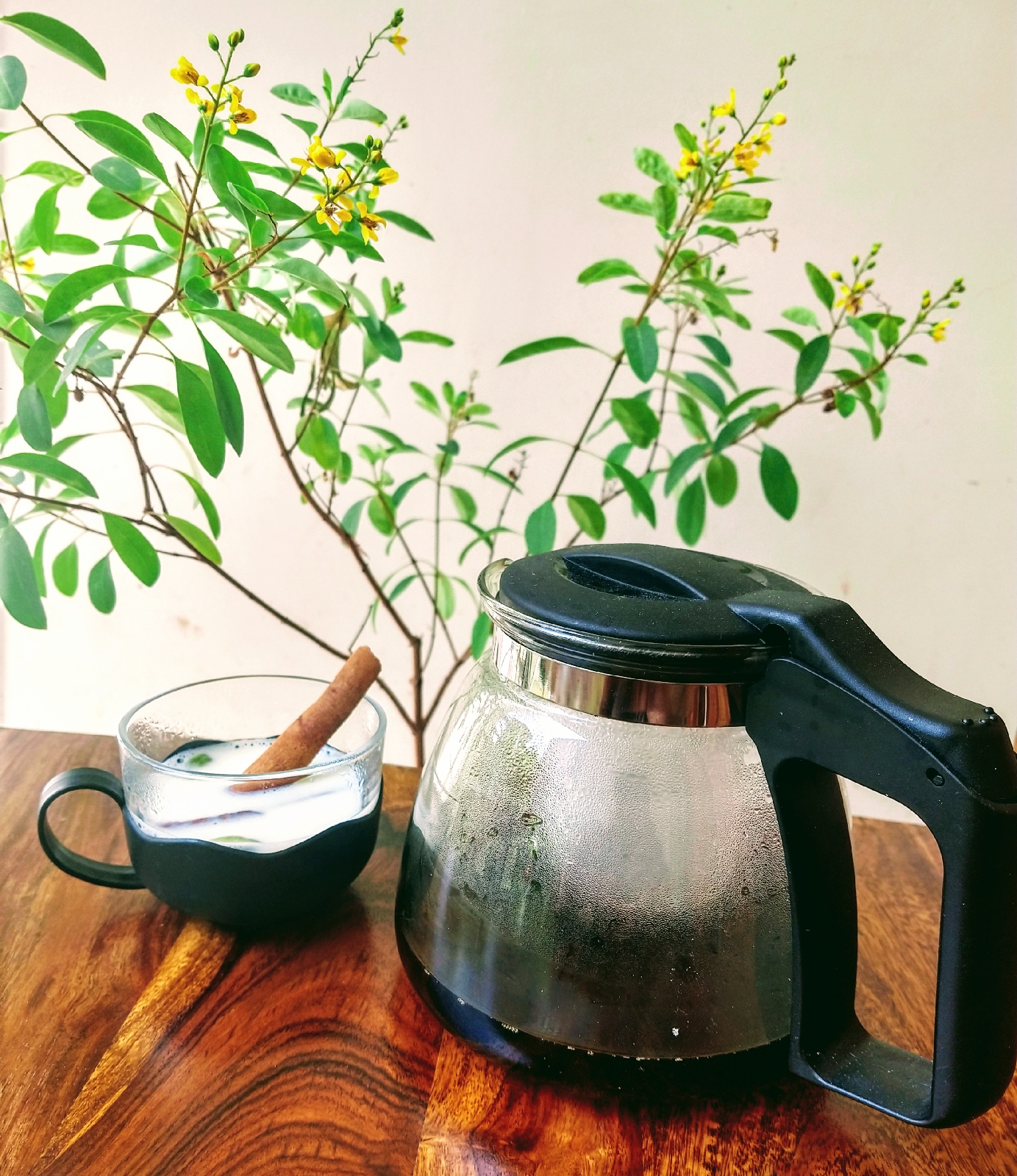 Our all new Spiceffee made with Desibean Coffee is prepared with fresh brew mixed with the best Indian spices to get flavorful notes. We've added some flavor enhancing spices like cinnamon, cardamom, nutmeg and more. Trying different types of spices helps you get creative with your cup of coffee. Cinnamon and Cardamom pass on warm and cozy notes. Ingredients: 1. Fresh ground coffee - 4 teaspoons 2. Spices- Cinnamon and Cardamom, Nutmeg, Pepper, Cloves 3. Coffee maker 4. Milk- 1/2 cup 5. Sugar- 1 or 2 teaspoons Method:  Put in coffee grounds to the filter basket of the coffee maker, then add 2 Cardamom, Cloves, Pepper, Nutmeg respectively to boiling water and pour it in the coffee basket to brew for about 10 minutes. Now, take a cup with 1/2 filled hot milk and sugar, put the brew in the remaining cup and enjoy!  Another way is to combine spices with hot milk, add sugar and lastly add the brew. 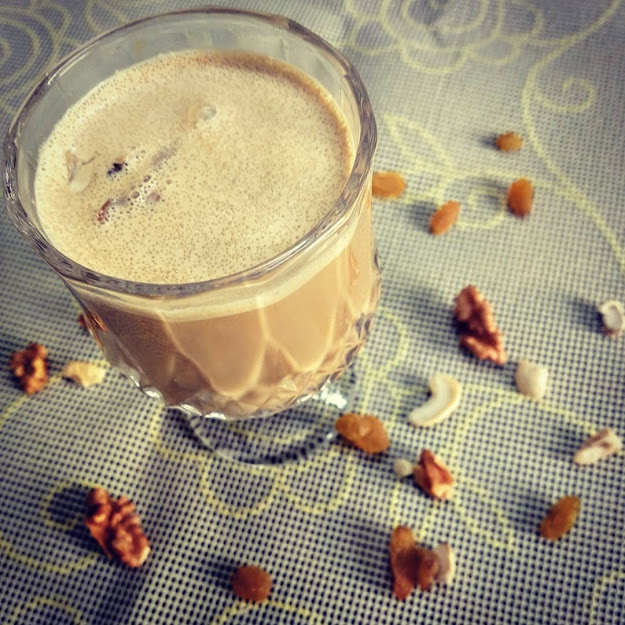 DRY FRUIT COFFEE A special dry fruit coffee for our coffee lovers. When I made the recipe it tasted like Thandai. In India, a chilled sweet shake with some spice is called Thandai. So, the twist is that I tried making it with coffee.  Dry fruits are nutritious and have a good amount of calories too. But, it's a great drink to make for a party. Ingredients 1. Chilled milk 2. Dry fruits like - cashews, raisins, dates, walnuts, almonds ( soak them in water for about 2 hrs to get best flavours) 3. Sugar syrup. 4. Cold-brew coffee - Steep coffee overnight. ( DESIBEAN COFFEE - " DECODE" ) Method Grind all dry fruits separately and then blend 2 spoons of the dry fruit mix, 1 or 2 spoons of sugar syrup (according to your taste), around 50ml cold-brew coffee with chilled milk in a blender. Pour it in a glass of your choice and enjoy. It's a simple recipe. Try making it in a party or festival. People will love it.  I used Desibean's special tradition 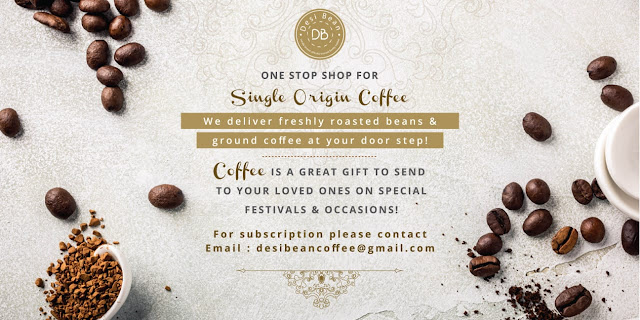 Desibean Coffee Company was formed in 2017, our motive is to offer finest quality of Arabica and Robusta filter coffee and much more at reasonable prices. Based in Bengaluru we also strive to educate local farmers about the different ways of growing coffee apart from the traditional way.  Our mission is to promote love for coffee in markets worldwide and to attain this mission, we work with great sincerity and ensure that our freshly roasted Coffee are of best quality, and are availed widely by our clients. Our Products include Roasted Coffee beans (Arabica and Robusta) , Filter Coffee Powder (in all grind sizes), Coffee blends like- Premium blend, Traditional blend. Follow us on